In this episode, we welcome Robert Likarish, co-founder and distiller at Ironroot Republic Distillery, into the studio to chat about two not-so-distant relatives of beer and wine: whiskey and brandy. Robert founded Ironroot with his brother, Jonathan, in 2014. The distillery is located in Denison, Texas and known primarily for its whiskies, which it began releasing in 2017, but it also makes gin, vodka and moonshine. Ironroot specializes in French-style distillation and plans to release brandy in the near future. Robert brought five whiskies by the studio and we tasted them side-by-side in a bonus audio clip.

Ironroot Promethean: A103-proof bourbon that offers spicy flavors thanks for the little bit of rye in the mash bill. Made from purple corn, Bloody Butcher corn, and flint corn, which offers cayenne pepper notes. It’s a cocktail-friendly spirit.

Ironroot Esoteric: This limited release is the culmination of Ironroot’s experimentation series. It’s a blend of more than 25 small-batch bourbons founders Robert and Jonathan Likarish have produced while honing core and new flavor profiles. Sweeter up front with a subtle kick in the aftertaste. It’s released annually in the spring.

Ironroot Starka: A “light whiskey” made with a substantial portion of roasted wheat and distilled at more than 160 proof.

Courvoisier VSOP Cognac: I had only tried brandy once before this episode, so I decided to go with a standard classic for our show. Courvoisier has been in operation since 1809, was Napoleon’s brandy of choice, a staple ingredient in Charles Dickens’ party punch, and the official toasting drink of the Eiffel Tower grand opening. Like Champagne, brandy can not be called Cognac unless it is from the Cognac region in france, which Courvoisier is. I chose the bottle of V.S.O.P. for our segment — a designation for eaux-de-vies that have been aged for a minimum of 4 years, which means Very Superior Old Ale. This spirit is golden in color with floral ripe peaches on the nose and tastes like caramel, toffee, almonds, and stone fruit, wrapping up with a long finish. It’s obvious why this Cognac has been the toast of Paris for over a century, and still remains a frontrunner in the market today.

That distillery in Waco

We mention a Waco, Texas distillery frequently in this episode. It’s called Balcones Distilling is famous for distilling blue corn to make whiskey.

A Texas whiskey you’ll only find in England

Founded in 1698, wine and spirits shop Berry Bros. and Rudd in London is a revered beverage institution. It’s the exclusive seller a Texas bourbon called Texas Legation Batch No. 2. made by Ironroot Republic Distillery. Here are the tasting notes:

Deep and enticing, dusty sweet corn husks mingle with rich seasoned oak notes to provide an assertive, uplifting nose which is softened by honey and vibrant fruit. The palate expands gloriously with a background sour mash and chalky hit doused by layers of honey and dark treacle. Lingering and giving this is a masterpiece of balance, complexity, texture and structure.

Bourbon, for example, requires a mash bill of at least 51% corn, which is more than you’re likely to find in a beer.

Both brewers and distillers brew a wort and let it ferment, though the length of time and temperature at which each ferments will be different depending on the beverage. Whiskey ferments for a shorter period of time than beer and at a warmer temperature. The whiskey wort is also then distilled and aged for several years.

Coming back to bourbon, distillers are required to age the spirit in new oak barrels to meet the distilling parameters. Much like Ireland has Irish whiskey and Scotland has Scotch, bourbon is the tried and true American whiskey.

Brandy initially came into being as a means to preserve wine on long sea voyages. It derives its name from a Dutch word, brandewjin, that means “burnt wine” and refers to the process of heating the wine through distillation. In a broad sense, brandy is any spirit distilled from a fruit and its juices, but if the brandy is made with any other fruit than grape, it must state so on the bottle (apple brandy, peach brandy, etc).

Fermented grape (or fruit) juice is heated to approximately 170°-200°F (80°-100°C) to separate the alcohol from water. The liquids distilled from the wine/fermented grape juice include alcohol, a bit of water, and many of the grape’s organic compounds which impart important flavors to the brandy.

The distillate is placed in an oak barrel (probably French oak with varying levels of toast, depending on the producer) to age. Base level brandies are aged for a minimum of 2 years (V.S. or Very Special), but like whiskey and wine, the longer the brandy is on the wood the more the aging shapes its unique tasting notes, and the higher the quality and price ultimately is. Lower end brandies also doctor their spirit up with something called dosage, an artificial boost to the color of flavor using syrups.

Cognac is most commonly made from a white wine grape called Ugni Blanc, and Armagnac (another noteworty brandy region in France) is commonly made with Folle Blanche. Brandy is typically served as a digestive, sipped room temp from a small tulip glass after dinner, but is also much beloved by many rappers across the country and frequently featured in music videos (Tupac shares his deep connection with Hennessy here, while Bhusta Rhymes feat. P Diddy and Pharrell share their inspiration in Courvoisier, and here’s a smattering of other great references).

It’s important to note that while both brandy and grappa are distilled grape juice, they differ in many ways. For starters, brandy is solely the juice of the grape being fermented, but grappa is fermented grape pomace, which includes the skin, seeds, and stems. Brandy has its roots in France while grappa hails from Italy, and brandy is typically aged in oak barrels while grappa is quickly stored in stainless steel before being bottled.

Huge thanks to our guest this week Robert Likarish! Check out Ironroot Republic Distillery in Denison, Texas every Saturday for distillery tours and the first Saturday of every month for live music and cocktails. Cheers! 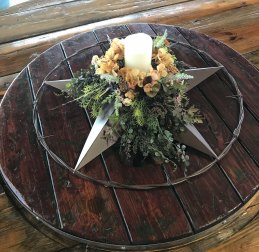 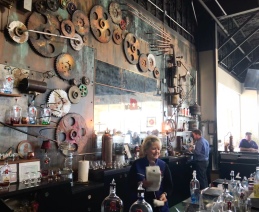 Robert and his mom working the bar at Ironroot Republic Distillery